Continuation of Leaders in Military and Business


The next question is logically what do the other personality types provide to an organization if the xSTJ's tend to be the ones that succeed the most.  Or at least they are the ones that stay in business or the military and move up.  As the previous blog discussed (leaders-in-military-and-business-same.html) it would seem that the personality types, ISTJ and ESTJ have an advantage in business and the military that allows them to do better and move toward the higher ranks in both business and military organizations at a faster rate than other personality types.  As I stated in that post the dominant and auxiliary functions for these two types is Introverted Sensing (Si) and Extraverted Thinking (Te). 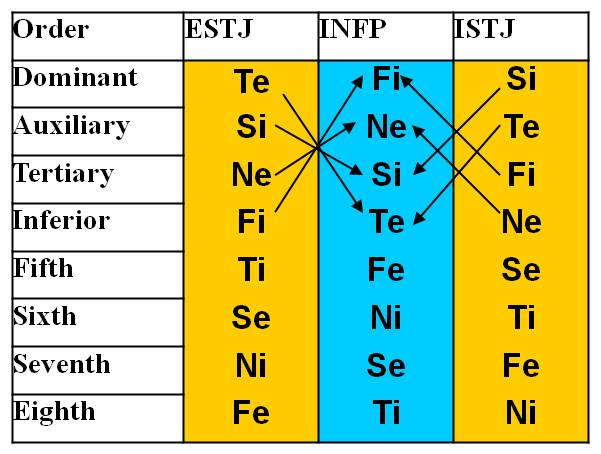 In fact the functions in order for ISTJ and ESTJ are shown in the table to the left and are compared to my own type code INFP.  I often read about people comparing personality types strictly by way of the 4 letter code.  This is how it was introduced to me also.  While there is some validity and I imagine some people have been helped by this comparison it is just too simplistic and I do not believe it is the way the MBTI was originally meant to be used.  The MBTI was supposed to get us to Jung's theory.  When we look at the Jungian functions in their archetypal positions for both xSTJ's and compare them to my personality type of INFP you can see some striking comparisons that may be overlooked when comparing the 4 letters. As you can see I share my 4 conscious functions with the xSTJ's.  This is sometimes called complementary type codes and is  OVERLOOKED when you compare just the four letter codes, and probably why I was told during my first introduction to type (and also later in my career) that I probably will never really be able to communicate well with a majority of Army officers.

When I was a junior officer in the Army there came a time when I had to specifically decide to get out of my comfort zone and make some drastic changes in how I preferred to do things.  This was more of a survival instinct since I knew nothing of personality type at the time.  Later after becoming certified in the MBTI I looked back at some of these decisions and realized that what I had done was to bring my tertiary and inferior functions to the foreground in support of my dominant and auxiliary.  I discovered that providing a well organized, logical presentation allowed me to present things to senior officers that supported my values but talked their talk.  That is I was getting better at talking the language of Te to support my dominant Fi values.  I will admit that in my early days of getting out of my comfort zone I was not always successful.  OK I stumbled a lot. I think I spent a lot of time trying to guess at what I needed to do next.  I did not have the knowledge of type that I have now or even a hint of this theory.

So how do others survive in this xSTJ world?  Mainly by drawing on their other functions to provide the same thing the rest of the community are looking for.  Everyone of us has all 8 functions within us and it is the ability to access our lesser trusted functions that allow everyone to go beyond their initial potential.  Learning to access this potential is called development.  We do not have to stay stagnant.  I have seen many times someone who has the functions and abilities desired in a specific industry as their dominant function.  More often than I care to remember I saw them do well as junior employees because they naturally do and say the things that get them noticed and make them successful.  As they progress they may continue to do well but struggle with changing conditions or the need to be more well rounded.  On the other hand the individual who was forced out of his or her comfort zone early in their career in order to survive, and continues to develop their secondary skills, may hold an advantage due to the ability to now bring to bear not only their lesser trusted functions which they used to keep pace with their cohorts, but their more trusted functions at times when they may be needed.  This developed flexibility could easily mean the difference between individuals selected to higher levels of responsibility.  These individuals can also provide their bosses unique insights they may not get from others especially when the boss understands the need for well rounded employees.

So who is a better hire?  Neither or both, the hiring / promotion systems need to look at abilities and how well the employee is able to take on different and more varied responsibilities at higher levels. How do they deal with change, how do they deal with people and if they are expected to lead then how well do they take care of their people.